SS Joseph and Swithun’s Parish: past and present

The Parish: past and present 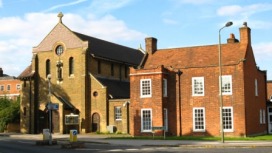 began in the Middle Ages, with monks from the Priory of Rochester. However, the history of our church dates back to the late 19th century, when Monsignor Goddard established a mission at Willowbank in Bromley (see timeline below). The first Mass was said in a tin structure in 1892, and the church as we know it was built in 1912.

At around the same time, the Bromley Common area was developing in order to provide homes for the many people employed locally in the Gasworks and Brickworks, along with many agricultural laborers. Many of these being immigrants from both Ireland and the European continent.

The Bromley Common Mission was founded thanks to a legacy from Miss Frances Ellis who was left a considerable fortune by her Farther. She would identify poorer areas that needed churches and then work with both the Clergy and local people to build a community, buying sites and constructing Churches with her own money. She was responsible for the construction of over twenty-two churches in the archdiocese of Southwark alone.

St Swithun’s Church is one of several built to an almost identical Romanesque Revival style designed by Rev. Benedict Williamson and it is now the only church to remain virtually unaltered.

We have several weekend masses, across both churches, which are attended by, on average, almost 1,000 parishioners.

We have about 50 Parish groups, including music teams and choirs, youth groups and social and liturgical groups – all contributing to the enthusiastic life of the Parish.

We are blessed with a thriving Catholic Primary School close by. It has near-outstanding academic achievements, and is currently working towards Academy status.

We support several local charities, working with and for homeless and deprived people of all ages and older people in need of care in their own homes. Trinitarian and Holy Family Sisters, based in their neighbouring Convents and the Holy Ghost Fathers in Bickley, work tirelessly in our community.

St Joseph’s Church is a neo-Romanesque brick church, built in 1912 by Edward Goldie. Its furnishings include several statues, such as St Joseph, the Virgin and St Anthony. A large timber crucifix hangs suspended from the arch. The Stations of the Cross are large, unframed carvings.

An oil painting of the Assumption hangs between two windows in the north transept. The Lady Chapel has a simple reredos with a statue of the Virgin in a niche, above a small altar with a tabernacle.

Many of the stained glass windows are from the 1920s and 1930s and depict the Annunciation, the betrothal of the Virgin, Our Lady of Lourdes and St Bernadette, the dove of the Holy Spirit, Melchizedech, Christ with chalice and bread, the risen Christ, the Marriage of Cana and Moses with the Manna, the Trinity with two saints, the Holy Family, the presentation in the Temple, and Christ among the doctors.

1886 – In December, Monsignor Goddard, the priest at Chislehurst, establishes the mission in Bromley. The Trinitarian sisters set up a convent at Willowbank, 8 London Road. Here, Monsignor Goddard says the first recorded Roman Catholic Mass in Bromley on Christmas Day 1886. There were 13 people present, but a year later there were as many as 60 members in the congregation.

1888 – The Holy Trinity Convent purchased the Freelands estate at Plaistow for a convent and school.

1889 – A convent chapel is built for use by parishioners. Fr John O’Meara becomes the first resident priest later in the year.

1892 – In January, work starts on a temporary chapel. It is built from corrugate iron at a cost of £460 on land close to the current site. A presbytery is soon acquired and the Bishop of Southwark opens the church on 13March.

1909 – The then parish priest Fr Walter Cooksey begins fundraising for a permanent church and school. The Trinitarians provide the site and the funds for the small school, which opens in November. The existing St Joseph’s Primary School owes its origins to the generosity of the Sisters.

1912 – Based on designs by Edward Goldie, work starts on the new church, with the Bishop of Southwark laying the foundation stone on 8 July. St Joseph’s church is completed five months later and opened by Bishop Amigo on 13 December. The old temporary church is demolished.

1919 – A pulpit at St Joseph’s church is erected as a memorial to the parishioners who died in the First World War. It has since been removed.

1948 – A new stained-glass window is installed in the south aisle of St Joseph’s church to commemorate the Golden Jubilee of the mission.

1974 – St Swithun’s church is re-ordered and a choir gallery was added to the west end.

1977 – St Swithun’s was initially served from St Joseph’s Bromley. Bishop (later Archbishop) C’llyril Cowderoy made the area a ‘mission’ and in 1977 Archbishop Michael Bowen erected it into a properly constituted parish.

1992 – In June, the first Whole Parish Mass is celebrated in the grounds of the Holy Trinity School, to celebrate the Parish Centenary. The Principal Celebrant is Bishop Alan Clarke, a former parishioner.

1997 – In October, Duncan Aitkins is ordained to the Permanent Diaconate at St Joseph’s Bromley. He is appointed to the Bromley Deanery to serve in St. Joseph’s, Bromley.

2006 – Rev Canon Tom McHugh becomes St Joseph’s parish priest – the fifth since 1916. He had previously been the parish priest at Roehampton.

2009 – In September, the first One Parish Mass is held in the grounds of the Holy Trinity School.

2010 – In June, The One Parish Mass is held in the grounds of the Holy Trinity School.

2011 – In June, The One Parish Mass is held in the grounds of the Holy Trinity School, where it will be held over the next few years.

2013 – Bromley Parish is given responsibility for St Swithun’s Parish, after the retirement of Fr Bob Mercer. Fr Cyriac Palakudy OFM Cap is appointed Assistant Priest. In June, Barry Mellish is ordained to the Permanent Diaconate at St. Joseph’s, Bromley. He is appointed to the Bromley Deanery and in October will take up the role as Secretary for The Deanery of Bromley, South East Area, Diocese of Southwark.

In July, Fr Arbogast Lekule (Fr Arbo) leaves St. Joseph’s Parish to take up his new appointment as Parish Priest of St. John Fisher Parish, in Kidbrooke, within our diocese. In November, Canon Tom McHugh takes up the role as Dean of Bromley, South East Area, Diocese of Southwark, for a three-year term.

2014 – In June: Aidan McPartlan is ordained to the Permanent Diaconate at St. Joseph’s, Bromley. He is appointed to the Bromley Deanery. In September, Sister Maria Carla, a Trinitarian Sister, celebrates 50 Years since she made her first vows. In October, Deacon Duncan Aitkins is appointed to serve in Saint Theresa of the Infant Jesus at Biggin Hill.

2016 – In February, Fr Cyriac Palakudy OFM Cap leaves St. Joseph’s Parish to pursue both his pastoral work and his studies.

2017 – In May, the Parishes of St. Joseph and St. Swithun are amalgamated. The new parish is to be known as SS Joseph and Swithun Bromley. Canon Thomas McHugh is the Parish Priest of the newly created parish. In June, the annual One Parish Mass, the first combined mass for SS Joseph and Swithun Parish Community, was held  at Aylesford Priory for Mass, followed by a shared lunch and festive events to celebrate the two churches becoming “One Parish, One Body, One Spirit in Christ”.

2018 – In June: Rev Canon Tom McHugh celebrates The Golden Jubilee of his Ordination. In July: Garry Cullen is ordained to the Permanent Diaconate at St George’s Cathedral and is appointed to the Deanery of Bromley. In September, Fr Saju Pinakkattu Thomas leave the Parish to take up a new appointment, as Parish Priest of St. Dominic Parish, Waddon, within our diocese. In November, Fr. Matthew Kwaghtaver CSSp is appointed Assistant Priest of SS Joseph and Swithun Parish.

2019 – From May–July, an Alpha course is held for the first time. In June, A new comprehensive database is launched to provide a reliable and up-to-date account of SS Joseph and Swithun parishioners’ contact details. In July, Rev Canon Tom McHugh retires as Parish Priest of SS Joseph and Swithun. This event was marked by a One Parish Mass in the school grounds. The principal celebrant was Archbishop Peter Smith. Canon Tom’s final mass at St Joseph’s was Sunday 14 July.

In September, Fr Peter Murphy becomes the sixth SS Joseph and Swithun Parish Priest. He had previously been the Parish Priest at Corpus Christi, Tonbridge. In October, Sister Filsy leaves the Parish, and return to India. She has been a Trinitarian Sister at Holy Trinity Convent for 32 years and has ministered to our parishioners for over 12 years.

Thanks to Taking Stock for some of the above information. For further details on St Joseph’s Church, its features and furnishings please visit the Taking Stock website.

You can download an extended history of the first century of our parish on Amazon Kindle. The church gets a commission for each download. Download 100 Years of St Joseph’s Catholic Church here.